In this article we intend to give a holistic overview on why objects appear coloured.

If you shine 100% red light on a 100% blue object, it will appear black. We don’t observe this in real life because most pigments and most wavelengths we come across are not pure. This experiment sets the basis for the generally accepted hypothesis that opaque objects absorb most wavelengths in and around the visible spectrum, and the ones they don’t absorb becomes their colour.

The Mechanism of Colour

The Colour that you see is probably because it is scattered the most by the object’s atoms or molecules or electrons.

Scattering happens when the light that is incident on an object is not used up by its atoms/ molecules. We’ll discuss later how atoms and molecules use the energy. But for now, remember that an electron does not take up all the energy that falls on it. The left out energy can be scattered by either reflection or refraction.

In most cases it is the electrons that absorb electromagnetic radiation and respond to them. There are several ways in which electrons can respond to incident radiation, one of them makes colour: absorption. While most compounds will absorb some portion of the spectrum for sure, only a few compounds called pigments usually “don’t absorb” very specific wavelengths of light, which gives those objects their colour.

What happens to the energy that is absorbed? It can either heat the object up “directly” by increasing its temperature, i.e. , increasing kinetic energy of the atoms and molecules (You can read more on how heat travels through objects here). Or it can heat up the object “indirectly”, in which case the electrons after absorbing the light re-emit shorter wavelengths of light or infrared light. Examples of this are luminescence and phosphorescence. In both these phenomena, light, such as UV light is absorbed by molecules, which re-emit shorter wavelengths of light, i.e. visible light.

Absorption of light removes certain wavelengths from the incident light by converting them to other forms of energy like we just mentioned. So the remaining wavelengths scatter from the atoms and come to our eyes and we see colour.

Other Ways of Absorbing Energy

Diamond is clear, but graphite is blackish-grey. Even though both have the same atoms in their structures, why do they appear so different?

The answer lies in the kinds of bonds they have. A small intro to sigma and pi bonds: Sigma bonds are single bonds and are caused by the complete (head-on) overlapping of various orbitals. Whereas pi bonds are formed by sideways overlapping of orbitals which is usually weaker than the head-on overlapping of the sigma bonds. When these bonds form and the orbitals overlap, they give rise to molecules and these overlapped orbitals lose their individual identities and become molecular orbitals. These orbitals now have completely different energy levels determined by the extent of overlapping, which determines the strength of the bond and how more or less easily it can be disturbed. Read more on orbital theories here.

The energy gap between pi bonding and antibonding orbitals is less than the gap between those of sigma. So, whenever an incoming photon hits an atom with more pi bonds, it is likely to be absorbed and make the electron jump to that higher antibonding level. This is not that easy in case of sigma bonds, and sometimes, visible wavelengths are incapable of being absorbed due to high energy gaps. Please remember that electrons are selective in absorbing energy and only do so, so as to jump to their allowed energy levels.

Graphite has both sigma and pi bonds. Pi bonds being not so energy-demanding absorb mostly the entire spectrum of colours in carbon. This makes graphite look blackish as no visible light gets reflected back or transmitted through refraction.

So what’s special in diamond is that it consists of sigma bonds throughout, which make its energy gaps large for the visible radiation to cover. This is why diamond lets all the visible light that falls on it pass through and appears crystal clear.

Reflection is not the same thing. If diamond was, suppose, reflecting the light instead of refracting, it would appear white and not transparent.

2. Colour Due To Single and Double Bonds

Different compounds have different kinds of bonds, double bonds, single bonds, etc. The size of the wavelength that an electron will absorb or take in from the light incident on it depends on the space that the bonds of the compound provide the electron. This space, for instance is more in double bonds as compared to compounds having mostly single bonds. So larger the space an electron has, larger is the wavelength it can fit in, and thus absorb, or vice-versa. (Reference)

3. Colour due to Ligands

Ligands are the ions or molecules attached to a metal atom in special types of compounds called Coordination Compounds. Watch this video to understand how ligands can provide colour to a compound.

We’ll explain with a famous example. The coloured complexes of transition elements like Copper, Iron, etc. have ligands attached to the transition metals. These ligands have their own fields and interact with the electrons of the metal ions, causing splitting of the d-orbitals (in case of transition metals) into sets of two different energy levels.

When a bundle of visible wavelengths falls on these complexes, a particular wavelength(s) is absorbed to take an electron from the lower to the higher level. As the rest of the wavelengths pass through the complex, our eyes analyze the colour which is absent (or subtracted) from the spectrum and see the colour (or a combination of colours)  in contrast with the one absent.

Here’s why gemstones are differently coloured!

4. Colour Due To Chemical Composition of the Medium

We all know that most plants appear green due to chlorophyll, which absorbs all other frequencies except green.

Another interesting case is of Cyanidin, which gives flowers their colour. What’s cool is that it is a single chemical that gives different colours in different situations. The colour it absorbs depends on the pH level of the flower. Acidic medium leads to absorption of shorter wavelengths, so the flower appears reddish. While basic medium makes cyanidin absorb larger wavelengths, to make the flower look blue (remember, the flower can always become happier, just keep decreasing the pH!). 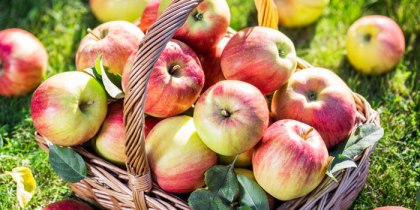 There’s one more way to reverse the colour of the flower and which also explains why apples sometimes appear red on one side, and greenish on the other. It is due to a chemical named Anthocyanin, which again plays the game ‘absorb some, reflect rest’. Read here for more details.

Let us know if you know of other ways objects absorb electromagnetic energy.

Bugs & Carmine – An example of a pigment

Pigments and paints which are mostly made from pigments have simple Physics behind the colour they have. Pigments are powdered solid particles which absorb specific wavelengths of light from the bundle of wavelengths that fall on them and scatter or reflect the others. If these scattered wavlengths happen to fall in the visible region we see the colour of the pigment as a combination of all those colours reflected after some colours being removed by the pigment through absorption. You may refer here.

The Peculiar Case Of Dyes

The dyes are known to have colours because they have special structures called Chromophores. Chromophores have alternating double and single bonds and are usually attached to aromatic rings (for dyes), which allow better delocalization of electrons over the compound. Their main job is to alter the energy levels of the compound in such a way that it absorbs wavelengths only in the visible region. The fact that different dyes are differently coloured depends on the arrangement of chromophores within them. Read more about dyes, here.

Colour Due To Temperature

Colour sometimes is independent of what is being absorbed or reflected but is purely due to the temperature of the object. This is called thermal radiation. You can read more about thermal radiation and other things here.

Liked it? Take a second to support Spherical Hysterical on Patreon!